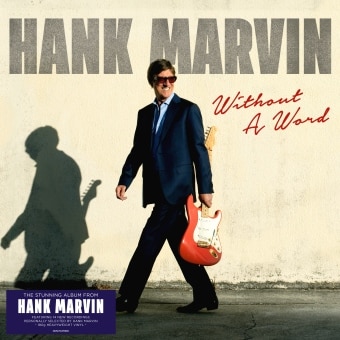 This Vinyl LP edition comes in 180g heavyweight black vinyl. Hank Marvin: the man who defined the sound of a generation releases his 16th solo album, his first since the Top 10 success of the eponymously titled ‘Hank’ in 2014.

Entitled Without A Word the album comprises 14 new recordings all of which given Hank’s interpretation of some of his all-time favourite tunes, along with one new original composition; Russian Doll co-written and recorded with his son Ben. Hank Marvin is one of the most influential guitar players of all time. Initially known as the lead guitarist of The Shadows – the band that evolved to become the UK’s biggest ever selling instrumental group – Hank has also enjoyed a long and successful solo career lasting almost 60 years Hank was the very first in the UK to own an iconic Fender Stratocaster – when Cliff Richard imported the guitar from the US exclusively for Hank to play – since when generations of guitar players worldwide cite him as the man that inspired them to pick up their first guitar, a tribute confirmed when he regularly features high on the list of polls that determine the greatest guitarists of all time.