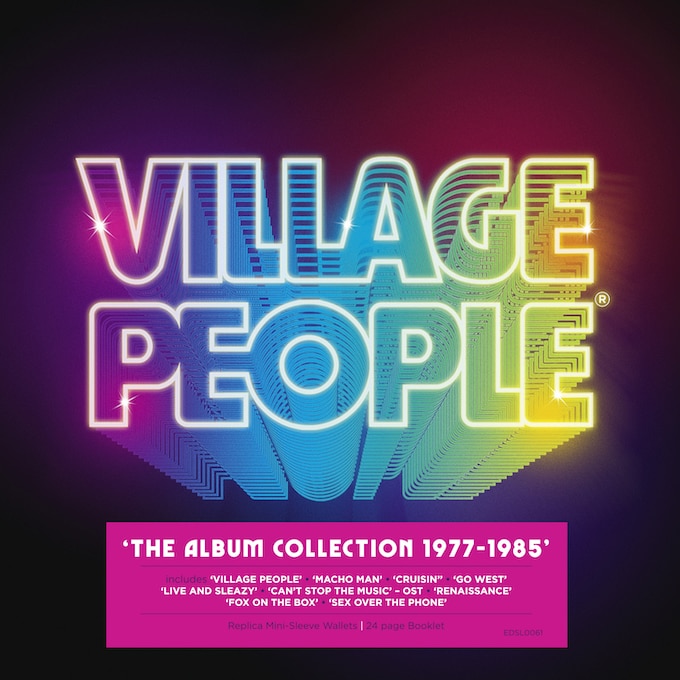 Village People® were a phenomenon and one of the most successful pop groups of the late-1970s, selling Tens of millions of records worldwide, charting one of the all-time Top 40 best-selling singles.

They were known for their catchy tunes, on-stage costumes and suggestive lyrics but they transcended all barriers. They simply released great pop records, which were mostly Composed and Produced by Jacques Morali for Can’t Stop Productions, Inc., who came up with the Group’s concept.

This 9 album collection covers the Group’s albums from the debut 1977 ‘Village People’, up to 1985’s ‘Sex Over The Phone’, including 1979’s Double album ‘Live And Sleazy’, which has been reproduced within the set on two discs.

The albums are packaged in mini replica sleeves, including gatefold wallets for ‘Live And Sleazy’ and ‘Can’t Stop The Music’.

For the 40th anniversary of the group, Victor Willis re-joined and backed by a live band, Village People® continues to thrill concert-goers around the world — as they did back in the day – and as seen in New York’s Times Square on New Year’s Eve 2019, the eve of a sixth decade of their popularity.