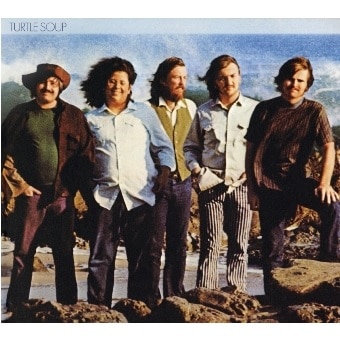 October 1969’s Turtle Soup was the group’s most consistent album, as well as their only to feature all original material from the pens of the band members. Produced by Ray Davies of The Kinks in Hollywood, it remains the only complete rock album that Davies helmed outside of his legendary band. Inspired by The Kinks, The Turtles turned in ditties like “Bachelor Mother”, the fanciful “John And Julie”, as well as the more muscular “Come Over”. ‘Turtle Soup’’s real standouts include Howard’s “You Don’t Have To Walk In The Rain” and Al’s “Love In The City”, both issued as hit singles prior to the album’s release.

The bonus CD features six songs from the band’s abandoned follow-up album ‘Shell Shock’, produced by Jerry
Yester, as well as demos and outtakes from ‘Turtle Soup’. With a booklet note by Andrew Sandoval, this 2 CD digipak edition (exclusive to the UK) has been newly re-mastered by Bill Inglot.