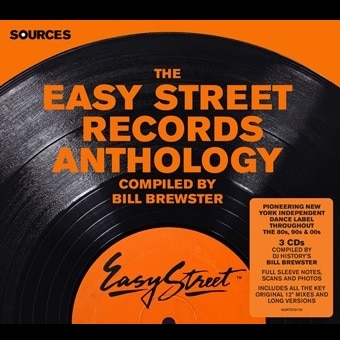 Sources is a brand new series which will examine the output of a number of extremely influential independent U.S. labels throughout the 1970s, 1980s and 1990s.

In an age where corporate anonymity reigns supreme and music is being treated like aural wallpaper, the Sources series will go back to a time when record labels really meant something via their A&R policies, their ground-breaking releases, their everyday modus-operandi and their general philosophies.

Bill Brewster, co-founder of the influential DJ History website and forum and author of the acclaimed “Last Night A D.J. Saved My Life” has compiled the sleeve notes for the series. The first six releases will concentrate on 6 New York independent labels which have each been massively influential in the evolution of Dance Music over the last 30+ years – Easy Street, Sleeping Bag, Fresh, Sam,Streetwise and P&P.Each 3 x CD package is full of lovingly re-mastered original 12” mixes as selected by Bill. These will include many tracks which have never made it to CD before! All notes and scans will be included in a 16 page colour booklet which fits beautifully within the 3CD superior digipack.

The first Sources package comes from one of the most consistent underground dance labels in history – East Street Records from New York. Easy Street hit the ground running in the early 1980s with two consecutive international hits in row with the compulsive reggae-funk of Monyaka’s “Go Deh Yeka” and the uptempo break dancing gem, Hot Streak’s “Body Work”. Then, in the 90s, came two more smashes with Adeva’s garage anthem “In And Out Of My Life” and De’Lacy’s dance-floor monster “Hideaway”. However, the real story of Easy Street was their consistent ability to gauge the mood of the dance-floor with numerous HUGE underground classics which read like a who’s who of dance music history over the last 3 decades – Paul Simpson, Todd Terry and Blaze are just a handful of the names which have graced the Easy Street label over the years. The underground hits poured out relentlessly – “Please Don’t Break My Heart”, “Main Thing”, “Share The Night”, “Ma Foom Bey”, “You Don’t Know”, “Treat Her Sweeter”, “Saturdays” and “Deeper” to name a handful, all of which are included on here. An essential package for anyone who wants to re-experience the culture of the New York dancefloors throughout the last three decades via one of the hippest labels in dance music history. Easy Street Records we salute you in style!