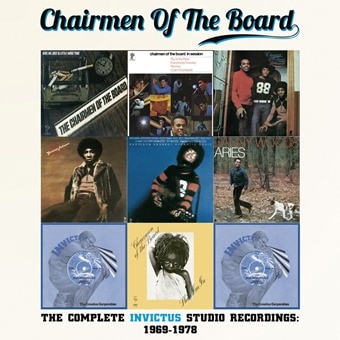 Motown’s legendary songwriting/production team, Holland-Dozier-Holland, left the fold in 1967, to establish their own Invictus/Hot Wax group of labels.

They had worldwide hits with their flagship act, Chairmen Of The Board, debuted the first album by Parliament, as well as scoring a UK #1 with Freda Payne’s ‘Band of Gold.

Chairmen Of The Board were unusual at the time, with all the group members being featured vocalists in its line-up.

This 9CD, 97-track anthology includes Chairmen Of The Board’s four studio albums for Invictus, as well as the Invictus solo albums released by General Johnson, Danny Woods and Harrison Kennedy.

The two bonus discs include alternate versions, non-album singles and selected mixes, including two Tom Moulton remixes of their two biggest UK hits ‘Give Me Just A Little More Time’ and ‘(You’ve Got Me) Dangling On A String’, which were first released in 2014.