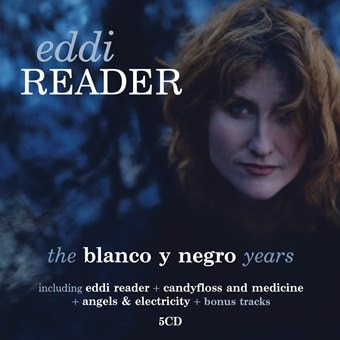 After two albums with Fairground Attraction and a solo album, Eddi Reader signed with Geoff Travis’ Blanco y Negro label and recorded the three albums in this box between 1994 and 1998.

The two bonus CDs contain the many non-album singles b-sides, including covers of songs by Paul Buchanan (of The Blue Nile), Ray Davies, Ivor Cutler and the Trash Can Sinatras, as a well as a collaboration with Jools Holland and his orchestra. The booklet contains all the credits and lyrics, and brand new annotation by Colin Irwin.