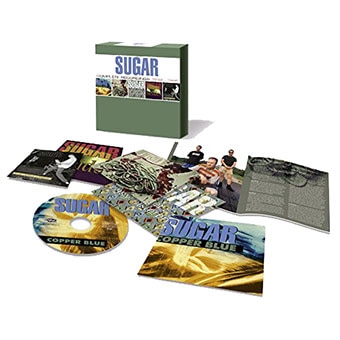 CD boxset containing the complete recordings made between 1992 and 1995 by Sugar, the short Copper Blue is the debut album by Sugar, the short-lived but brilliant trio of Bob Mould (guitar, vocals), David Barbe (bass) and Malcolm Travis (drums). Upon the band s formation at the start of 1992, Bob Mould already enjoyed legendary status thanks to his legacy as a key member of Hüsker Dü, the Minneapolis band that within six years and seven albums transcended their roots in the US hardcore punk scene and drafted a new blueprint for rock music that would influence a generation of younger musicians most notably the Pixies and Nirvana. Following Hüsker Dü s acrimonious break-up in January 1988, Mould recorded two solo albums for Virgin. By the beginning of 1992 he had assembled a new band, signed to the rising Creation Records and released 3 UK top 10 albums, including the classic debut Copper Blue (NME s 1992 album of the year).

The set contains all 3 studio albums, a B-sides collection, and a live album all in CD size mini-replica sleeves plus a 36 page book containing photos, rare memorabilia and candid interviews that tell the story of the band s short but intense career in their own words. All recordings have been remastered from the original tapes by FUEL engineer Jim Wilson.