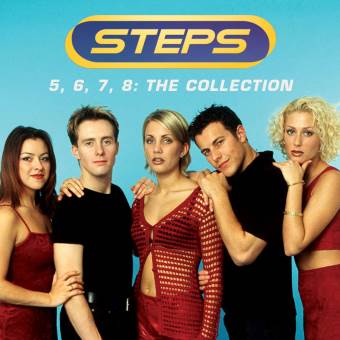 Steps were quite simply a phenomenon – one of the most successful pop acts of the 1990’s. In 1999 their UK tour was the biggest pop arena tour ever staged, and in a period of four years they sold a remarkable 12 million records.

The quintet brought together by songwriters Barry Upton and Steve Crosby with manager Tim Byrne was made up of three female vocalists and two male – Claire Richards, Faye Tozer, Lisa Scott-Lee, Ian “H” Watkins and Lee Latchford-Evans. After the debut single ‘5, 6, 7, 8’ which peaked at #14, Steps hit the top 5 with 14 consecutive single releases – which at the time was a feat previously achieved only by the Beatles

2CD set includes the group’s #1 hits ‘Tragedy’ and ‘Stomp, all five #2 hits ‘One For Sorrow’, ‘Better Best Forgotten’, ‘Love’s Got A Hold Of My Heart’ ‘It’s The Way You Make Me Feel’, and ‘Chain Reaction’, and the other hits and more. Also included are a clutch of extended remixes, and Steps version of the all-time greatest Christmas single: Slade’s ‘Merry Christmas Everybody’