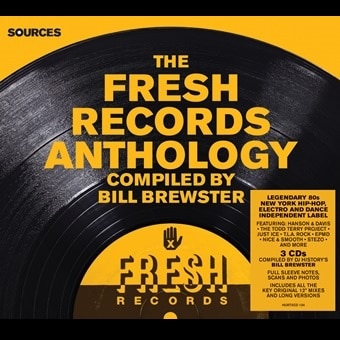 Sources is a brand new series which will examine the output of a number of extremely influential independent U.S. labels throughout the 1970s, 1980s and 1990s.

In an age where corporate anonymity reigns supreme and music is being treated like aural wallpaper, the Sources series will go back to a time when record labels really meant something via their A&R policies, their ground-breaking releases, their everyday modus-operandi and their general philosophies. What made these operations unique? How did they manage to compete with the major companies? How did they protect their artist rosters? What sort of people ran these operations and how did they manage to survive in the cut-throat music business? Bill Brewster, co-founder of the influential DJ History website and forum and author of the acclaimed “Last Night A D.J. Saved My Life” will be compiling and writing the sleeve notes for the series. The first six releases will concentrate on 6 New York independent labels which have each been massively influential in the evolvement of Dance Music over the last 30+ years – Easy Street, Fresh, Sleeping Bag, Sam, Streetwise and P&P.

Each 3 x CD package will be full of lovingly re-mastered original 12” mixes as selected by Bill. These will include many tracks which have never made it to CD before and you can be sure that a variety of ‘secret weapons’ will emerge from each of these packages! All notes and scans will be included in a 16 page colour booklet which fits beautifully within the 3CD superior digipack. The usual Harmless PR and Radio operation will support all Sources releases.

The second Sources package comes from one of the most consistently interesting underground independent labels in both Dance Music and Hip-Hop/Rap history – Fresh Records from New York. The label was founded in 1985 as a sister label to Sleeping Bag but with more emphasis on the rapidly emerging Hip-Hop and Rap audiences as well as some cutting edge Dance grooves. They set the template with four blistering releases from electro-dancefloor duo Hanson & Davis, old-skool rapper T.L.A. Rock, the ultra-menacing gangsta rapper Just Ice and the Mantronix produced 12:41. The label continued to release some huge cutting-edge dancefloor smashes with The Todd Terry Project which exploded internationally with “Bango”, “Back To The Beat”, “Weekend” and “Just Wanna Dance” before the label went on to find mainstream U.S. chart
successes with Hip-Hop acts EPMD, Nice & Smooth and Stezo. Fresh Records ruled the roost between 1985 and 1982 when parent label Sleeping Bag eventually floundered. Once again this is an essential package for anyone who wants to re-experience the culture of the New York
Dance and Hip-Hop scenes from the mid 1980s to the early 90s. Fresh Records were truly ahead of the pack and produced records which were exactly as described on the label!