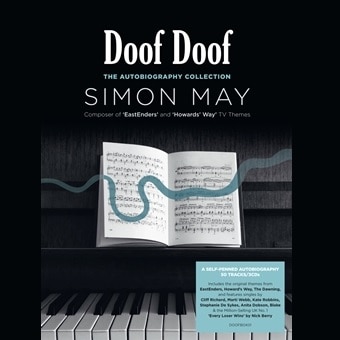 Simon May’s music is probably better known than he is! One of his compositions has been heard on TV more than twice a week
for the last 30 years…‘EastEnders’! Two of his legendary TV theme compositions both celebrate their 30th anniversary in 2015; ‘EastEnders’ and ‘Howards’ Way’.

This 3CD/50-Track box set features many of Simon’s most famous compositions from the last 40 years. This collection goes back to the early-70s and follows Simon May’s career up to the very recent past and includes hits by Cliff Richard (#23), Stephanie De Sykes (#2), Kate Robbins (#2), Marti Webb (#13) and Anita Dobson (#4), as well as his own 1976 Top 10 hit ‘Summer Of My Life’ (#7), the 2011 Royal Wedding-aligned single by Blake and a debut EXCLUSIVE of the ORIGINAL demo of the ‘EastEnders’ theme.

Also included is the Million-Selling UK No. 1, ‘Every Loser Wins’ by Nick Berry. Other themes include ‘The Dawning’, ‘Castaway 2000’, ‘Animal Park’, ITV’s 1988 Seoul Olympics coverage theme, as well as several selections from the musical ‘Smike!’.The booklet features a 24,000 word self-penned abridged version of his forthcoming autobiography. Special DVD-sized clam-shell packaging, for the perfect listening and reading experience.