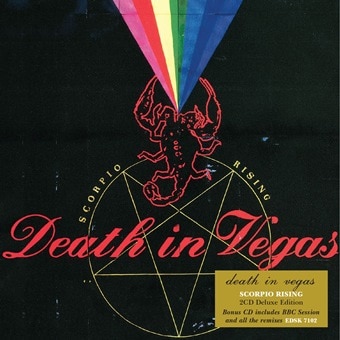 Like its predecessor ’The Contino Sessions’, ‘Scorpio Rising’ was another massive critical success on its release in September 2002, and it duly went Top 20 in the UK – again, a mind-blowing achievement for such an experimental, disparate and often macabre listening experience.

This special 2CD set brings together on a bonus disc all the mixes of the singles as well as a BBC Evening Session from the album’s aftermath which gives a window onto how the Death In Vegas roadshow unfolded as a fully integrated live band. Liner notes by renowned music journalist Andrew Perry include interview with Richard Fearless.