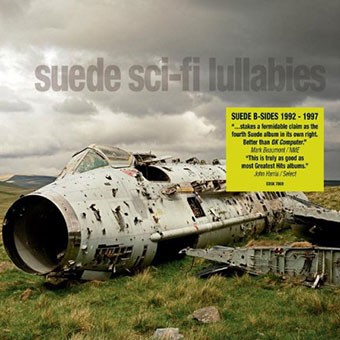 More often than not, what awaited fans when they turned over a Suede single was just as compelling – sometimes more so – than the song whose name was emblazoned on the sleeve. This alternative history of Suede bears testament to producer Ed Buller’s contention that – especially in their collective infancy – Suede “used their B-sides as opportunities to be more ambitious”. On its release in 1997, the reception meted out to this Sci-Fi Lullabies collection was uniformly enthusiastic and the album reached # 9 in the UK album chart. Brett Anderson frequently cites the album as his favourite Suede release, and the band still perform many of these B-sides in concert. This long-awaited 2 CD digipak edition includes a booklet with all the lyrics.
2CD set. Stellar 27-track collection of prime-period B-sides from the UK outfit, spanning 1992 to 1997. Includes “My Insatiable One”, “To The Birds”, “My Dark Star”, “Together”, “He’s Dead”, “Killing Of A Flash Boy” and more.