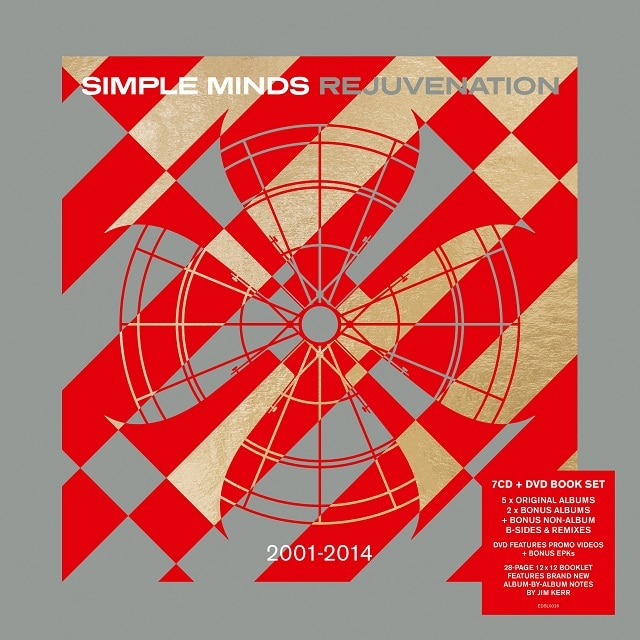 After leaving the Virgin label, and a one-off album with Chrysalis, Simple Minds took stock and decided to make records for themselves. An album of cover versions of songs dear to Jim Kerr and Charlie Burchill, “Neon Lights”, was released in 2001, followed by “Cry” in 2002, an album of new compositions recorded in Glasgow and Sicily. The recordings for “Black and White 050505” were completed on the 5th May 2005, hence the title. “Graffiti Soul” continued the band’s return to the top, charting at # 10 in May 2009. “Big Music” [2 LP] was released in October 2014, charting at # 12.

This 7 CD + DVD 12 x 12 book set features the five albums plus twenty-four bonus tracks – non-album B-sides and originally limited bonus CD tracks, including the rare album of covers “Searching For The Lost Boys” (now including a cover of T. Rex’s “Children Of The Revolution”), and the “Big Music” Bonus CD (now including the Simple Minds/Stranglers collaboration). The remixes include the four acclaimed Johnson Somerset remixes of the singles from “Big Music”.

The DVD features the ten rare single promo videos from these albums, along with the even more rare EPKs made for the albums’ promotion.

House in a handsome 12 x 12 book, the booklet features photos and newly-written extensive and revealing album-by-album notes by Jim Kerr himself.