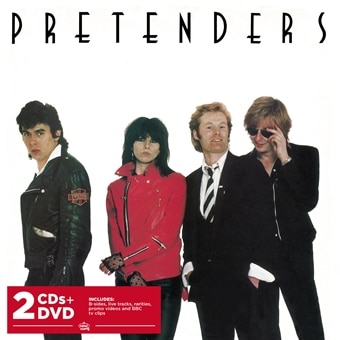 Edsel is immensely proud to issue all eight Pretenders albums issued under the Warners banner from 1979 to 1999. All the reissues are presented in digipaks, six as 2 CD + DVD sets and two as CD + DVD sets, including b-sides, live tracks, songs for soundtracks, demos, rarities, promo videos and BBC TV appearances (most of which have not been issued commercially before).

The Pretenders burst onto the music scene in February 1979 with their debut single, a cover version of Ray Davies’ “Stop Your Sobbing”, produced by Nick Lowe. By the time the debut album, produced by Chris Thomas, arrived in January 1980, third single “Brass In Pocket (penned by Chrissie Hynde) was on its way to the number 1 spot, as was the album.

The nineteen bonus tracks, b-sides, live tracks and demos, while the DVD features the three promo videos along with six BBC TV appearances from Top Of The Pops and Swap Shop. The booklet in this digipack edition features all the lyrics for the first time, the singles sleeves photos.