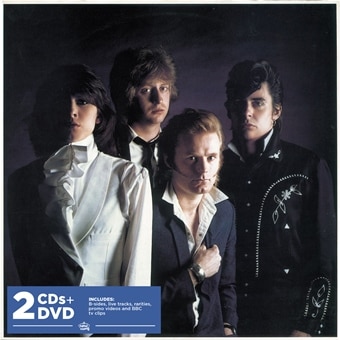 Second album “Pretenders II” was released in August 1981 and leaped straight in to the Top Ten. It was preceded by the Chrissie Hynde-penned hit singles “Talk Of The Town” and “Message Of Love” and also contained “Day After Day” and another hit version of a Ray Davies song, “I Go To Sleep”.

The twenty bonus tracks include b-sides, rarities and the entirety of a 15 song concert from the Santa Monica Civic, recorded in September 1981, while the DVD features the four promo videos, along with two BBC TV appearances from Top Of The Pops. The booklet in this digipak edition features all the lyrics for the first time, the singles sleeves and photos.
CD1 – Pretenders II (tracks 1-12)
CD2 – Bonus Tracks (tracks 1-5), Pretenders Live at the Santa Monica Civic 1981 (tracks 6-20)
DVD – Promo Videos (tracks 1-4), BBC TV Appearances (tracks 5-6)