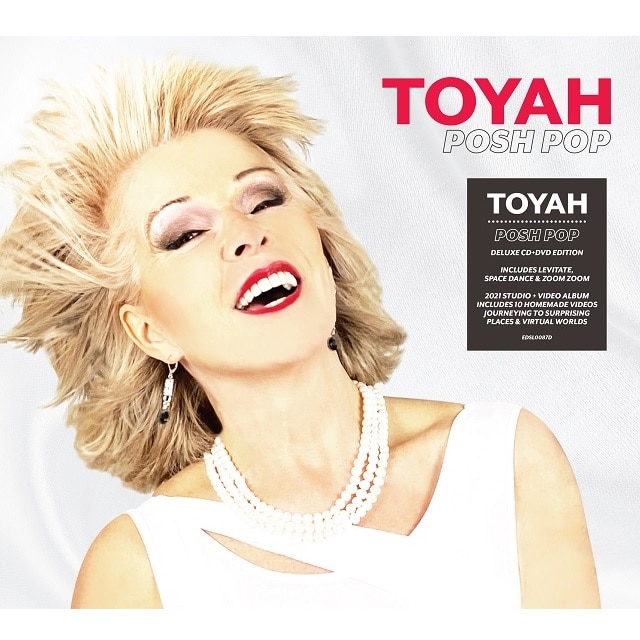 For over a year one of the most watched ‘YouTubers’ and internet sensations has been Toyah Willcox. Toyah’s ‘Sunday Lunch’ performances with Robert Fripp and weekend broadcasts have been seen by 38 million. Simultaneous to creating consistently unique online videos, Toyah made the album Posh Pop, co-written with and produced by Simon Darlow.

Posh Pop is a strong collection of infectious and affirmative pop songs that are as joyous as they are reflective, from the cosmic groove of “Space Dance”, to the sun-kissed anthem of unity “Summer Of Love”. The album features musicians Simon Darlow (guitars, keyboards, cello), Bobby Willcox (guitar) and Jeremy Stacey (drums).

Posh Pop opens with the energy-burst of “Levitate” and leads the listener on a journey that climaxes in the soaring, intergalactic-tinged “Take Me Home”.

This deluxe CD+DVD edition includes a bonus video album. Toyah has directed a video to accompany each of the ten songs on Posh Pop, with appearances from Simon Darlow, Bobby Willcox and Ellie Williams. These creatively inventive videos were lovingly made at home, in the garden and in a nearby abbey. Viewed together they present an escape into Posh Pop, journeying to surprising places, virtual worlds, and Toyah’s kitchen.