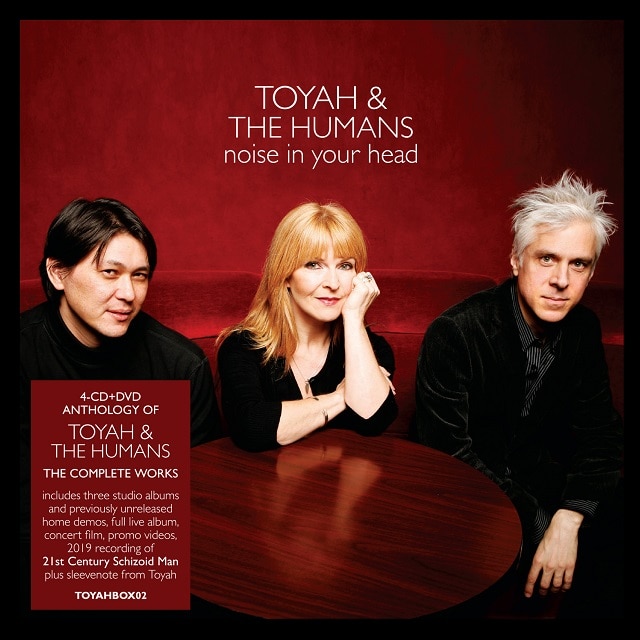 This 4 CD + DVD box set contains four albums (‘We Are The Humans’, ‘Sugar Rush’, ‘Strange Tales’, ‘Live At Scala London’) and six bonus tracks, including demos and an unreleased track, plus a DVD featuring a previously unreleased 90 minute concert, and four promo videos, all the discs in facsimile wallets. It’s the Complete Works of Toyah & The Humans.

The Humans were Toyah, her musical director Chris Wong and multi-instrumentalist, the late Bill Rieflin (drummer for King Crimson and latter-day REM, as well as Ministry, the Revolting Cocks, Lard, KMFDM, Pigface, Swans, Chris Connelly, and Nine Inch Nails). Toyah put the ensemble together in 2007 for the birthday celebrations of Toomas Hendrik Ilves, president of Estonia, a country already dear to Toyah.

As Toyah explains in her note in the 40-page booklet, “I was very keen to work on an idea where mid-range frequencies didn’t cancel out the natural space of the voice. Always having been in love with the bass I wanted to create a trio of just my voice and two basses, allowing power, prose and top line melody to dominate the audio spectrum. The Humans were to be music stripped bare.”

WE ARE THE HUMANS, released in 2009, features “Noise In Your Head”, “Quicksilver” and “Is It Wrong”. The CD now includes four bonus tracks: a cover of “These Boots Are Made For Walkin’” featuring Robert Fripp, and three of Toyah’s original home demos, demonstrating her original concept for the ensemble.

LIVE AT SCALA LONDON 2010 (2020) is the first full 16-track release of the entire concert, including the encores of “These Boots Are Made For Walkin’” and “Purple Haze”. Guest Human Robert Fripp features throughout. On the DVD, LIVE AT TRADING BOUNDARIES is a previously unreleased 90-minute, 21-song concert filmed in April 2015. Also included are four promo videos, issued on DVD for the first time.

The lavishly-illustrated 40 page booklet features annotation written by Toyah herself. Also featured is an essay on the period covered by the box by Toyah’s official archivist and compiler of this box set, Craig Astley.

The box set is dedicated to Bill Rieflin, who sadly passed away on 24th March 2020. Recorded in summer 2019, “21st Century Schizoid Man” was only recently mixed and is one of Bill’s last completed recordings. Sarcastically and affectionately, Bill referred to this anthology as The Humans’ Greatest Hits. Bill exchanged with Toyah this March, as included in her online tribute to him, that “We made good things together. Some of my best work ever.”