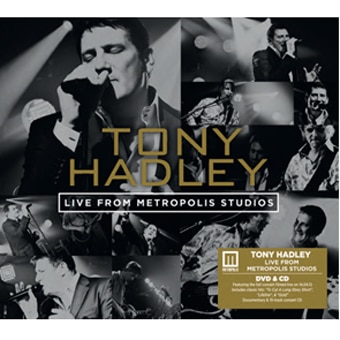 On Saturday 14th April 2012, a select number of fans descended on West London’s Metropolis Studios complex, to experience an exclusive live TONY HADLEY concert, in an intimate ‘Chant No. 1’ ‘club’ setting. For the first time since that night, you can relive or experience this concert, in this special DVD and CD collection, which includes the full concert and an on location documentary. Alongside band members Gary and Martin Kemp, Steve Norman and drummer John Keeble, Tony Hadley’s instantly recognisable voice helped to propel Spandau Ballet to incredible success, making the band one of the UK’s biggest global exports of the 1980s. TONY HADLEY – LIVE FROM METROPOLIS STUDIOS features some of his biggest hits from his solo and Spandau Ballet career, including To Cut A Long Story Short, Lifeline, Only When You Leave, Round And Round, Gold and the UK #1 single, True