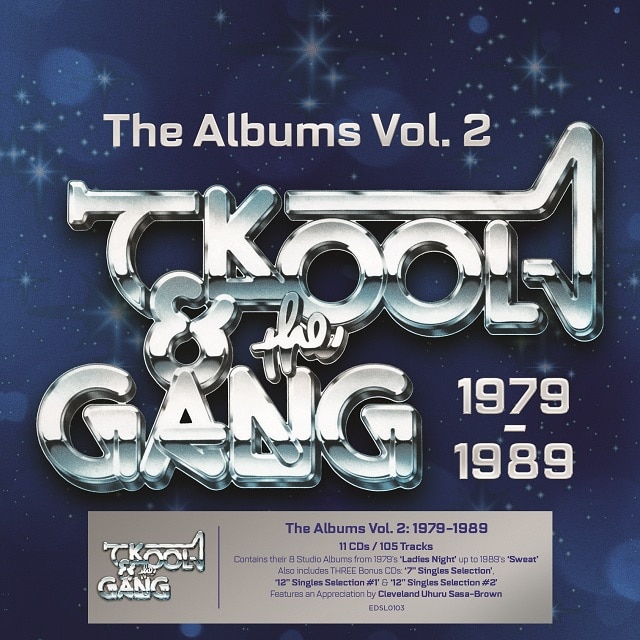 Kool & The Gang are one of the most sampled Bands in music history. From their roots in the mid-late ‘60s and a mixture of jazz and soul, funk and rock, R&B/Pop through the ‘70s, they appeared on the soundtrack; 1977’s “Saturday Night Fever”. With disco taking hold of the charts worldwide, an inspired change of direction brought in a recognised lead vocalist in James “J.T.” Taylor and Brazilian musician Eumir Deodato to the fold, with him signing-up to produce their next four albums.

The title track from 1979’s “Ladies Night”, gave Kool & The Gang their first UK chart hit, peaking at #9. It started a run with the band in the UK Singles chart every year until 1986, spending more than 200 weeks there. 1980’s “Celebrate!” spawned three singles, including the anthem ‘Celebration’, which became a worldwide multi-million selling single.

“Something Special” was released in 1981 and contained one of the all-time enduring pop records; ‘Get Down On It’ reached #3 in the UK Singles chart. A worldwide million-seller, which has since been streamed more than ¼ Billion times! “As One” was the final Deodato- produced album, with three UK chart hits, including ‘Big Fun’ and ‘Ooh La La La (Let’s Go Dancin)’, with the emphasis in the title name switched around. ‘Hi De Hi, Hi De Ho’ was released in late-1982, giving them another hit single, which also graced “Twice As Kool” in May 1983; a UK Top 5 Album.

“In The Heart” was released in December 1983. ‘Straight Ahead’ was the first of three Top 20 Singles, with ‘(When You Say You Love Somebody) In The Heart’ and ‘Joanna’ reaching the Top 10, the latter becoming their highest charting UK Single, reaching #2. In 1984, ‘Fresh’ was released ahead of its parent album “Emergency” giving the band two chart entries in December 1984, with them also appearing on the Band Aid single ‘Do They Know It’s Christmas?’.

Released in 1986, “Forever” included two US Top 10 hits: ‘Victory’ and ‘Stone Love’. Three more singles charted, ‘Holiday’ (R&B), ‘Special Way’ (Adult Contemporary) and ‘Peacemaker’ (#20 in New Zealand). “Sweat” was released in 1989 with a slightly changed line-up and a multi-producer album. Both ‘Raindrops’ and ‘Never Give Up’ appeared on the Billboard Hot Soul Songs chart.

Kool & The Gang’s place in music history is ensured with a joyful and vibrant legacy for generations of fans and music lovers to enjoy.