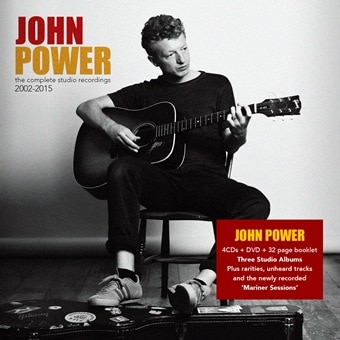 John Power first made his mark on the UK pop scene as bassist with renowned Liverpudlian quartet The La’s. After leaving The La’s, Power formed a new group called Cast. The timing of band’s emergence was perfect,  chiming with the mid-1990s rise of Britpop and, with guitar-based kindred spirits such as Oasis and Blur dominating the charts, Cast’s first two LPs, All Change (released in 1995 and reputedly Polydor’s biggest-selling debut album) and ‘97’s Mother Nature Calls both sold over 1,000,000 copies. Edsel released deluxe reissues of all four Cast albums early in 2014.

After Cast split in 2001, Polydor put on offer on the table for John Power to record as a solo artist, but at the time he’d had enough of the whole business and felt he just had to get out. Power finally released his solo debut, Happening For Love, the first of the three full-length albums featured in this box, in June 2003. Producer for the album was John Leckie, whose numerous production credits include Magazine, The Fall and The Stone Roses’ seminal debut LP as well as both Cast and The La’s. With the distance provided by hindsight, John views Happening For Love as representing “the last remnants of the Cast sound”,

Released in October 2006, Power’s second solo LP, the stripped-back Willow She Weeps could hardly have been more different from Happening For Love.  Ranging from lonesome country-blues, through to infectious and stomping fare, it’s a gutsily authentic, Americana-flavoured LP full of spirit and heart.

Stormbreaker is the third and (to date) last of John Power’s three solo LPs, but while it’s billed as a solo record, it’s actually the sound of The John Power Band firing on all cylinders.   Originally released in January 2008, it has become hard to find and expensive to buy. Its reappearance here shows that it’s an absolute gem.

Stormbreaker is a glorious extension of the roots-y, neo-Delta blues-rock sound of Willow She Weeps.  It’s full of dirt and grit and remains thrillingly raw.

Produced by John Leckie, Cast returned with an all-new studio album, Troubled Times, in 2012, but John Power has also continued to work on solo material (all in tandem with guitarist Jay Lewis).  The fourth disc in the box homes in on John and Jay’s stripped-back side project, with seven tracks recorded in December 2014’s The Mariner Sessions. Intimate, acoustic versions of selected songs from Happening For Love and Willow She Weeps sit side by side with previously unreleased tunes including the bouncy Station Master and the wistful, melancholic When Did It Start.  In addition the CD includes a spirited Janice Long radio session and several previously unreleased songs from the 2006 Willow She Weeps sessions.

Also included in this box set is a DVD which includes intimate in-studio footage of John Power and Jay Lewis recording The Mariner Sessions, and extended interviews with John Power covering those sessions and indeed his complete solo career.