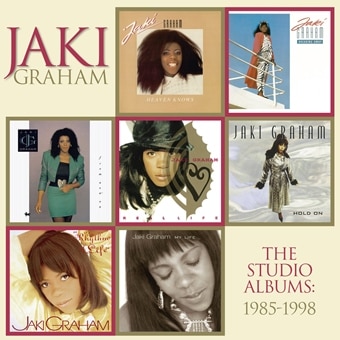 In the 30th anniversary year since the release of Jaki Graham’s debut album, ‘Heaven Knows’, Edsel is releasing a Special Edition box set containing the seven albums that were recorded for EMI Records and Japan’s Avex Records.

From March 1985, Jaki Graham had six consecutive UK Top 20 hit singles (including three Top 10 hits) – ‘Could It Be I’m Falling In Love’, ‘Round And Around’, ‘Mated’, ‘Set Me Free’, ‘Breaking Away’ and ‘Step Right Up’, two of them being duets with fellow-British soul singer David Grant – leading her to become of the UK’s best R&B/soul artists, whose singles gained her international recognition, including a US Billboard Dance Chart #1 in 1995, with a cover of Rufus & Chaka Khan’s ‘Ain’t Nobody’.