I Have A Dream: Classic Songs of the Seventies

I Have A Dream: Classic Songs of the Seventies 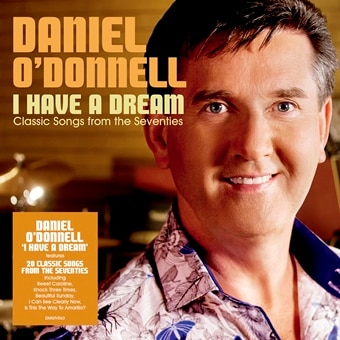 Daniel O’Donnell’s career has now spanned more than 30 years but he continues to delight fans around the world by his prolific recording and touring activities.

Earlier in 2016, Daniel O’Donnell became the first recording artist to chart an album for 29 consecutive years but he returns to confirm his place as one of the chart’s most prolific and successful recording Artists.

This autumn, Daniel also resumes his touring activities, having been away for a couple of years. His concerts always feature a jaunty and uptempo section, which is where the idea for his 700,000+ unit selling rock’n’roll trilogy and DVD started.

Daniel’s fans have always appreciated and constantly request more recordings from the 1970s, so this year’s album, which features 20 of the biggest songs from that decade, will also receive profile with a section devoted to the album in his nationwide autumn concerts.

Featuring a variety of ballads, country and pop hits of the time, ‘I Have A Dream’ is set to continue Daniel’s surge into the high end of the Albums Chart in 2016.