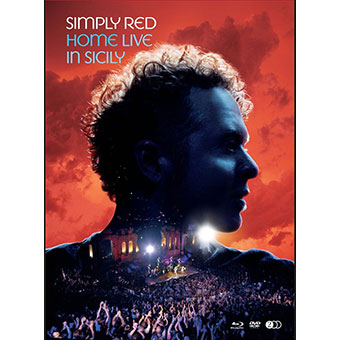 Completing the rich harvest of latter-day Simply Red recordings are two in-concert performances – Home Live In Sicily and Cuba! Originally filmed in HD, both sets feature the concerts on Blu-Ray for the first time, as well as on DVD and on two CDs.

The shows offer up contrasting locales but the constant is some sublime music led by a engaging, entertaining front man who soaks up the energy from the crowd and relays that back through an array of typically impassioned and electrifying vocal performances. Both casebound book sets feature bonus documentaries about the filming of the concerts, plus other features. The highlight of Simply Red’s 2003 summer tour was performed against the stunning backdrop of the open-air amphitheatre in Taormina. ‘Home Live In Sicily’ is a record of that night and features 90 minutes of classic hits old and new. Filmed on 23rd July and remastered in DTS and Dolby Digital 5.1 Surround Sound, it includes multi-angle camera work plus a “Mick Cam” option.

Extras on the DVD include a 20 minute behind-the-scenes documentary plus two bonus tracks, ‘The Right Thing’ (filmed at Montreux Jazz Festival) and ‘You Make Me Feel Brand New’ (recorded live in Croatia).