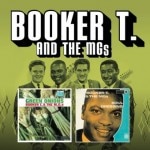 This first volume brings together the group’s first two albums, “Green Onions” and “Soul Dressing” from 1962 and 1965 respectively, with two non-album tracks. The booklet is extensively annotated by Tony Rounce.