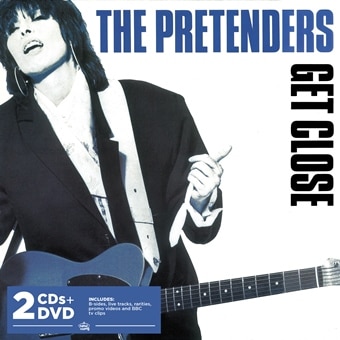 “Get Close”, released in November 1986, again featured guitarist Robbie McIntosh, but with a new rhythm section. It was preceded by the hit single “Don’t Get Me Wrong” and also included the huge hit “Hymn To Her (She Will Always Carry On)”.

The sixteen bonus tracks include b-sides, live tracks, different mixes and versions, as well as the band’s two contributions to the soundtrack of Bond film “The Living Daylights”, co-written by Chrissie Hynde and John Barry.

Also included is the band’s cover of Burt Bacharach’s “Windows Of The World” (with Johnny Marr on guitar). The DVD features three promo videos, along with two BBC TV appearances from Top Of The Pops and Wogan. The booklet in this digipak edition features all the lyrics for the first time, the singles sleeves and photos.