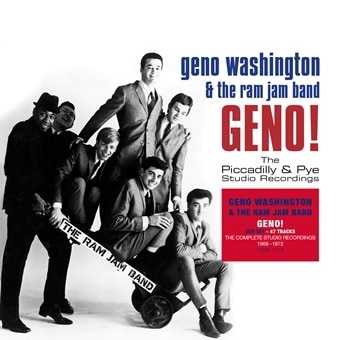 On the live circuit in the late 1960s, Geno Washington & The Ram Jam Band were probably the biggest crowd-pullers of them all. Relentless high-energy rock, blues, soul and R’n’B, and it was their live performances transferred to records that sold in huge numbers rather than the studio recordings.

Geno Washington & The Ram Jam Band released a string of fine chart singles in 1966 and 1967 – ‘Water’, ‘Hi Hi Hazel’, ‘Que Sera Sera’ and ‘Michael (The Lover)’ (referenced in Dexys Midnight runners #1 hit ‘Geno’). All the A sides and B sides are presented here in chronological order.

After two Top 10 charting ‘Live’ albums for Piccadilly, the studio album ‘Shake A Tail Feather’ for Pye Records came at the end of the year.

Disc Two comprises all the singles that followed the album, plus bonus tracks recovered from the vaults thirty years later.