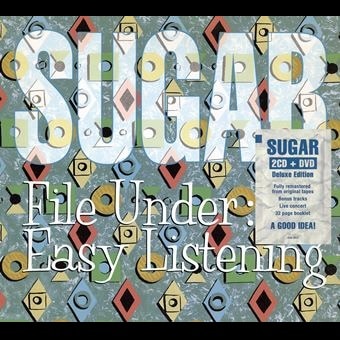 File Under: Easy Listeningis the third and final album by Sugar, the short-lived but brilliant trio featuring former Hüsker Düsinger/guitarist Bob Mould. Released in September 1994, FU:EL was hugely anticipated following the commercial and critical acclaim garnered by its two predecessors, Copper Blue (1992) and Beaster (1993). Featuring the singles “Gee Angel”, “Your Favorite Thing” and “Believe What You’re Saying”,it entered the UK album charts at No.7.

The album has been lovingly remastered from the original tapes, and is presented here in improved fidelity. Remastering engineer Jim Wilson comments: “I’m really happy this deluxe edition is coming out because it really does highlight the songs in a new way. I think a lot of people are going to be surprised hearing it again. The remaster is light years different sounding. It sounds like the record has been remixed. Now it sounds to me how we heard it in the control room. Both Bob and I are really thrilled.”

This deluxe expanded edition contains all the non-album b-sides, and a full length 1994 live concert.The DVD features all the promo videos from FU:EL alongside some rare TV appearances, including Bob Mould performing anacoustic duet with Lou Barlow (Dinosaur Jr./Sebadoh) on MTV’s 120 Minutes.

The 32 page booklet contains rare photos, memorabilia, and exclusive new interviewsthat tell the story behind the album and the band’s break-up in their own words.