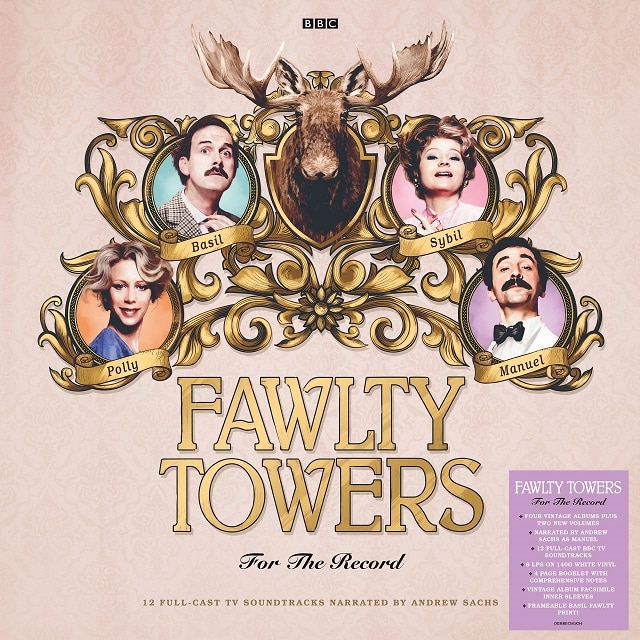 For the first time ever, a complete vinyl LP collection of Fawlty Towers TV soundtracks – with an exclusive frameable print signed by John Cleese – limited to 1500 worldwide

Four decades on from its original BBC TV broadcast, Fawlty Towers continues to shine as a masterclass in comedy writing and performance. Now the original four BBC vinyl albums – Fawlty Towers, Second Sitting, At Your Service and A La Carte – are joined by two newly created collections, Plat du Jour and Enjoy Your Stay, to form a box set of all 12 TV episodes. Much of the special linking narration – supplied by hapless waiter Manuel (Andrew Sachs) – is unique to the vinyl versions and hasn’t been available since their original pressings.

Each of the six 140g white vinyl LPs is presented in an all-new artwork cover, inside which is a facsimile of the original BBC Records & Cassettes cover (plus ‘faux’ period covers for Plat du Jour and Enjoy Your Stay). A four-page booklet details the development of Fawlty Towers, plus a history of the original LP releases, by Tim Worthington, author of Top of the Box – a guide to every single released by BBC Records And Tapes. A 12” frameable art print of Basil, which John Cleese has signed exclusively for this limited edition run, is also included in the attractive rigid box with lift-off lid.

Presented in their original vinyl LP edits, the episodes are Communications Problems (aka ‘Mrs Richards’), The Hotel Inspectors, Basil the Rat (aka ‘The Rat’), The Builders, The Kipper and the Corpse (aka ‘Death’), Waldorf Salad (aka ‘The Americans’), Gourmet Night, A Touch of Class, The Wedding Party, The Psychiatrist and The Anniversary. In The Germans (aka ‘Fire Drill’) a party of German guests and a fire drill make for a memorable day at the hotel, and the Major uses some inappropriate racist language.

PLEASE NOTE: Fawlty Towers is a classic comedy which reflects the broadcast standards, language and attitudes of its time. Some listeners may find this content offensive. This edition features the original BBC Records LP edits.