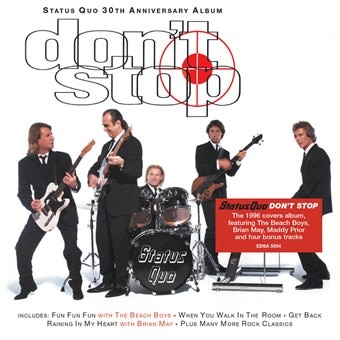 Status Quo’s 22nd studio album was issued in 1996 to celebrate the band’s 30th anniversary. Featuring an eclectic selection of fifteen cover versions, all given the Quo treatment, the album reached # 2 in the UK album charts.

It features guest appearances from the Beach Boys on a hit reworking of “Fun Fun Fun”, Steeleye Span’s Maddy Prior on a hit version of “All Around My Hat”, Queen’s Brian May on “Raining In My Heart”, as well as Tessa Niles on two tracks.

This expanded digipak edition features four bonus tracks (the b-sides of the singles from the album) and annotation by Classic Rock’s Dave Ling.