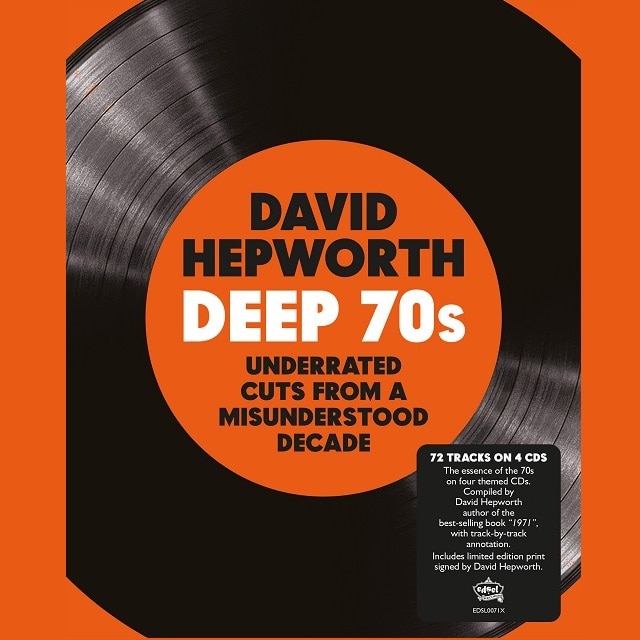 This Limited Edition includes a print signed by David Hepworth

David Hepworth has been writing, broadcasting and speaking about music since the 70s. He was involved in the launch and editing of Smash Hits, Q, Mojo and The Word. He was one of the presenters of BBC TV‘s The Old Grey Whistle Test, and one of the anchors of the BBC’s coverage of Live Aid in July 1985.

He has written six books about music in the last five years: 1971 – Never a Dull Moment: Rock’s Golden Year, Uncommon People: The Rise and Fall of the Rock Star, Nothing is Real: The Beatles Were Underrated And Other Sweeping Statements About Pop, A Fabulous Creation: How the LP Saved Our Lives, Rock & Roll A Level: The only quiz book you need and Overpaid, Oversexed and Over There: How a Few Skinny Brits with Bad Teeth Rocked America.

David writes a weekly column on podcasts for Radio Times and throughout the past two years, with Mark Ellen, David has co-hosted well over a hundred Word In Your Attic interviews on YouTube, with appearances from a galaxy of musicians, journalists, broadcasters and authors.

Here David explains his thoughts when putting this 72-track compilation together:

The seventies were a grubby but glorious time for records. Many of those records never sullied a chart. Nor are they served up by the algorithms which rule retro radio today. These four CDs correct that oversight. Young Americans revisits classic rock icons in the fierce morning of their genius. Beer Drinkers and Hell Raisers is unrepentant driving music from the days before the mandatory seat belt. Blue Boar Blues is dedicated to the legions of British groups who lived according to the white line on the M1. Finally, The Monstrous Regiment is a reminder of the female artists of the time, some of whom are just being recognised today. As my comprehensive notes modestly assert, more occurred between 1971 and 1979 than in any period of music before or since. This is not an opinion. This is a fact. This is a box set to prove it.