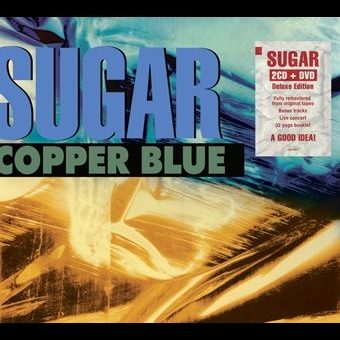 Copper Blue is the classic 1992 debut album by Sugar. Frontman Bob Mould had sung and played guitar for seminal midwest punks Hüsker Dü, openly acknowledged by the likes of Nirvana and The Pixies as a huge influence. Following their break-up and two well-received solo albums, Sugar saw Bob return to a band set-up, signing to the iconic Creation label and scoring indie chart hits with “A Good Idea”, “Changes”,“Helpless” and “If I Can’t Change Your Mind”. Copper Blue’s ebullient collection of richly melodic and anthemic songs saw Bob triumphantly reclaim an alternative rock legacy he had helped create. The album went in at number 10 in the UK album chart sand was NME’s Album Of The Year.

Twenty years on, the album has been lovingly remastered from the original tapes, and is presented here
in improved fidelity. Remastering engineer Jim Wilson comments: “Just in terms of the size and power and clarity of it all, the effect of this 2012 remastering is going to be immediately obvious to anybody.”

This deluxe expanded edition includes all the non-album b-sides, a BBC radio session and a full length
1992 live concert. The concert, a favourite of Bob Mould’s, was recorded by Chicago college radio station
WXRT and has been much bootlegged. This is the first legitimate release, with pristine sound quality, and
features the only recorded versions of Sugar covering “Armenia City In The Sky” by The Who and “Dum
Dum Boys” by Iggy Pop.

The DVD features all the promo videos from Copper Blue alongside TV appearances from the BBC and
MTV archives. The 32 page booklet contains rare photos, memorabilia, and exclusive new interviewsthat tell the story behind the album in the band’s own words.