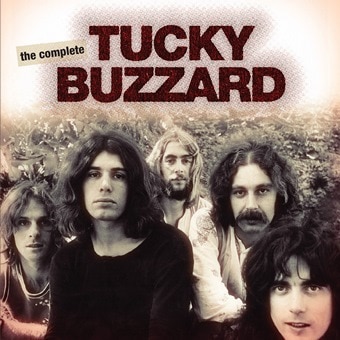 Having come to the end of the psychedelic path, The End decided on a change of musical direction and a change of name, arising from the ashes as Tucky Buzzard in 1970 and retaining the line-up of guitarist Terry Taylor, organist Nicky Graham, drummer Paul Francis, bassist Dave Brown, and vocalist Jimmy Henderson.

The first album, recorded with Madrid Philharmonic Orchestra directed by Waldo De Los Rios, contained some last vestiges of the band’s previous existence. But the second album, produced by old associate Bill Wyman with Glyn Johns at Olympic Studios set out the band’s template of bluesy rock, a leading genre at the dawn of the 70s. Mick Taylor makes a guest appearance.

For the fourth and fifth albums, the band was signed to Deep Purple’s own Purple Records. Bill Wyman continued in the producer’s chair, but the departing Nicky Graham was replaced with a second guitarist.

The booklet features photos from the collection of Terry Taylor, Bill Wyman’s right hand man in the Rhythm Kings for the last 25 years and extensive annotation by Alan Robinson.