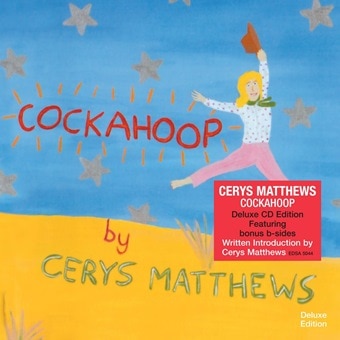 “Cockahoop” is the debut album from Cerys Matthews, originally released in 2003, two years after the breakup of Catatonia who’d enjoyed years of chart success and sold over 3 million records.

“Cockahoop” was recorded in Nashville where Cerys had settled at the time, and featured a team of stellar Nashville musicians, led by producer Bucky Baxter (Bob Dylan, Steve Earle, Ryan Adams), and including guitarist Richard Bennett (Emmylou Harris, Travis Tritt), drummer Ken Coomer (Wilco), and multi-instrumentalist Jim Hoke. The album came as a change of direction, showing how Cerys had embedded herself in the diversity of the roots, folk and Americana music she loves so deeply, and that she continues to support via her BBC 6 Music programmes.

This deluxe edition re-issue has the additional inclusion of the non-album b-sides, and a personal introduction written by Cerys Matthews.