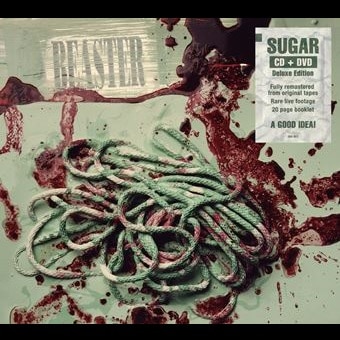 Beaster is the second album by Sugar, the short-lived but brilliant trio featuring former Hüsker Dü singer/guitarist Bob Mould. Released in April 1993, and recorded and mixed during the same intense sessions that produced its 1992 predecessor Copper Blue, this concise 6-song suite entered the UK album charts at No.3, a remarkable achievement for such a noisy and uncompromising rock record. Although darker in tone than the widescreen powerpop of Copper Blue, Beaster contains some of Bob Mould’s most powerful songs, from the splenetic frenzies of ‘Tilted’ and ‘JC Auto’, the religious torture chamber imagery of ‘Judas Cradle’, the transcendent ‘Feeling Better’, or the elegiac finale ‘Walking Away’.

For this deluxe reissue, the album has been lovingly remastered from the original tapes, and is presented here in improved fidelity. Remastering engineer Jim Wilson comments: “The effect of this 2012 remastering is going to be immediately obvious – Beaster has now really opened up, and you can really hear into the density of the sound, and you can hear all the words and all the melodies. It’s not just a wall of noise. It’s completely different. It’s a lot more of a melodic record than people know. The amount of air, the amount of energy and snap: if you thought that record made your head bob before, now it’s like being in a whole room full of people with brain injuries.”

The DVD features the promo video for ‘Tilted’alongside rare footage of the band performing live at Finsbury Park in 1993 at the Great Xpectations concertorganised by the Cure’s Robert Smith as a benefit for the fledglingXFM radio station. The 20 page booklet contains rare photos, memorabilia, and exclusive new interviews that tell the story behind the album in the band’s own words.