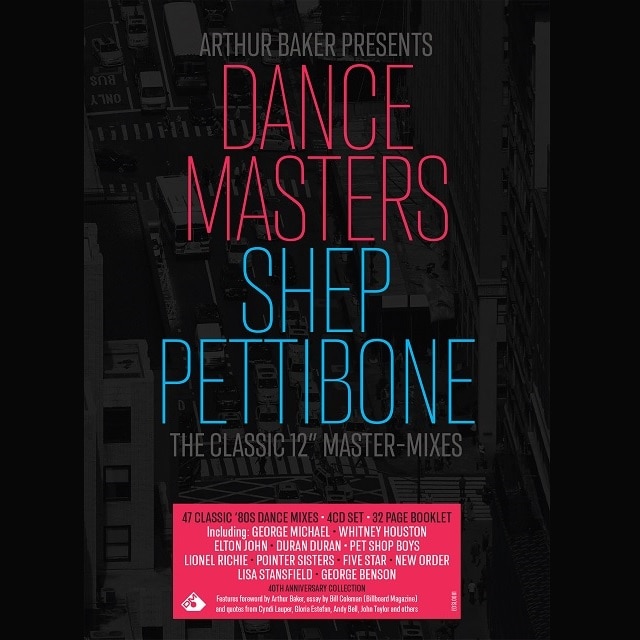 Demon is proud to present a new DANCE MASTERS series hosted by Arthur Baker, opening with a new collection of 12” and 7” remixes by the legendary Shep Pettibone.

What Shep Pettibone had that most other mixers did not, was a true radio sensibility. He inherently knew what would work on the airwaves, but was equally comfortable in a club setting, as a DJ and a fan, so he knew what worked both on the dance floor and on radio. That was a deadly combination.  Shep was also very open to all types of music and acts. From UK alternative sounds to NYC street sounds. From campy pop to gospel disco and electro R&B, Shep nailed them all and brought his expert sheen and sense of excitement to each of them. I am incredibly proud to open the Dance Masters series with this collection of some of his best work. – ARTHUR BAKER

First ever definitive collection of one of the most successful and celebrated remixers of the 1980s. Featuring 47 classic tracks compiled and sequenced by Wayne Dickson (BBR/Groove Line Records), this collections highlights both the major pop acts of the ‘80s as well as the underground club acts.  Some of these remixes are rare and hard to find with some of them making their CD debut.

Presented as a 4CD media book and including a 32-page book. Includes a foreword written by series curator and Dance music legend Arthur Baker, plus an essay written by Billboard Magazine dance columnist Bill Coleman which features quotes from the likes of John Taylor (Duran Duran), Andy Bell (Erasure), Gloria Estefan and Cyndi Lauper. The set also includes track-by-track annotations from the likes of DJ’s Danny Krivit, Lenny Fontana and Colin Curtis, along with artists such as Randy Muller (Skyy) and Richie Weeks (The Jammers/Weeks and Co.).

Featuring a list of some of the biggest and most diverse artists of the 1980s including Whitney Houston, George Michael, Pet Shop Boys, Pointer Sisters, RUN DMC, Kim Wilde, Lionel Richie and New Order, ARTHUR BAKER PRESENTS DANCE MASTERS: The SHEP PETTIBONE Master-Mixes is a unique collection of some of the most exciting records of the decade.