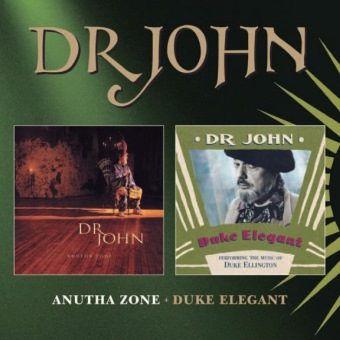 By the end of the 90s, Dr John was again embracing the mysterious bubbling gumbo of his Gris-Gris era, which was music to the ears of a generation of younger British musicians such as Paul Weller (who had covered “I Walk On Gilded Splinters” in 1996), Gaz Coombes of Supergrass and Jason Pierce of Spiritualized. While Pierce is credited with producing two tracks here, the lion’s share of Anutha Zone was helmed by UK producer legend John Leckie. Although much of the album was recorded in New York in 1998, six tracks were recorded at Abbey Road, with guest appearances from the UK stars above.

The following year saw Dr John pay his respects to the music of Duke Ellington – like he says: “Doesn’t sound like these tunes were written by a hundred year-old cat, but they were. You want to know the ticket to immortality, write a bunch of tunes that people keep on singin’ and playin’”.

The package includes a slipcase and the 24 page booklet is fully annotated by Paul Myers.