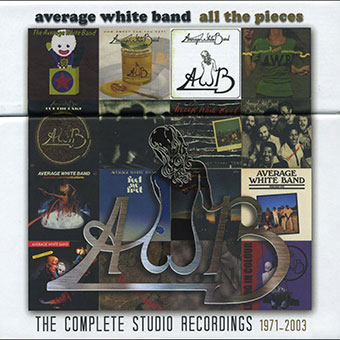 Average White Band are widely and rightly regarded as one of the best ever soul and funk bands. Although probably best known for their global hit, the US #1 single ‘Pick Up The Pieces’, this extensive anthology delves back into their musical history, from the early sessions in 1971, right up to the most recent studio album released this millennium.

‘All The Pieces…’ features the band’s entire catalogue of recorded material on a 19CD box set, which includes all of the original studio albums (and ‘spoilers’ ‘Put It Where You Want It’ and ‘Volume VIII’) in mini-vinyl replica wallets, alternate versions and selected mixes, in this 172-track collection. The box set includes the collectable re-packaged debut album ‘Show Your Hand’ – ‘Put It Where You Want It’ – whilst ‘Person To Person’ is packaged as a 2 disc gatefold wallet – to reflect the original 2LP set, ‘Feel No Fret’ is packaged as a gatefold release. The bonus CDs wallet artwork has been created by the legendary John Pasche, who designed the iconic AWB logo.

AWB’s repertoire has been a source of inspiration for many R&B acts, who have sampled their material and who cite AWB’s grooves as a major influence. The 52-page booklet includes an 11,000+ word liner note by US musicologist, Justin M. Kantor and includes recent historical recollections undertaken with Alan Gorrie and Hamish Stuart.