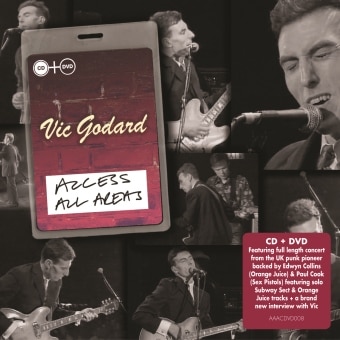 Described as ‘The Greatest Living Englishman’ by BBC 6 Music DJ Marc Riley, singer, London-based guitarist and songwriter Vic Godard was involved in punk’s first wave as leader of Subway Sect; they toured with the Clash on the legendary White Riot tour of 1977 and released some influential singles.

This concert from September 1992, staged at the Town and Country Club (now Forum) in Kentish Town, north London, was promoted by New Musical Express, and ended Godard’s decade-long absence from music. It sees him backed by Edwyn Collins, guitarist with Scots band Orange Juice, and former Sex Pistols drummer Paul Cook. The repertoire majors on then current album ‘The End Of The Surrey People’, with some Sect and Orange Juice classics mixed in. The year 2015 finds Vic still combining music with working at the Post Office, just as he did in 1992, and promoting the album ‘1979 Now’ with a new Subway Sect line-up.