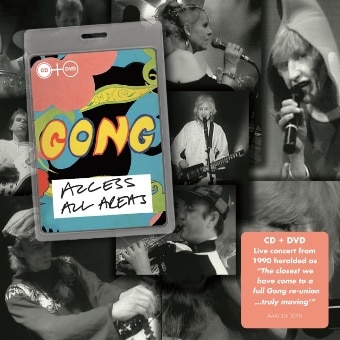 Gong frontman Daevid Allen first conceived the band in 1965, leaving a decade later, and this performance from 1990 was acclaimed by Canterbury fanzine Facelift as ‘the closest we have come to a full Gong re-union…truly moving’.

Its music majors on the legendary ‘Radio Gnome Trilogy’ from 1973-74 as well as material from 1971’s classic ‘Camembert Electrique’, sold by Richard Branson’s fledgling Virgin label for a bargain 59p – the price of a vinyl single. Great value…but Gong have always been great entertainment. And the story continues, despite Allen’s very sad passing in 2015.