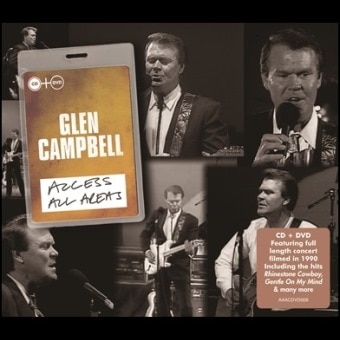 Often considered a country singer, Arkansas-born Glen Campbell made music over five separate decades in a variety of styles.

This 1990 performance at the Dome in Doncaster, backed by the Jeff Dayton Band, reflects Campbell’s unique career from the early Sixties on, kicking off with US chart-topper ‘Rhinestone Cowboy’ and ending with the Grammy-winning ‘Gentle On My Mind’.

It majors on his work with songwriter Jimmy Webb with ‘Galveston’, ‘By The Time I Get To Phoenix’, ‘Highwayman’ and ‘Wichita Lineman’. His second US chart topper, ‘Southern Nights’ by Allen Toussaint, is also featured, while a Beach Boys medley celebrates his time as a musician with that band. Alzheimer’s has now ended his active music-making, but Glen Campbell’s reputation lives on in songs like those collected here.